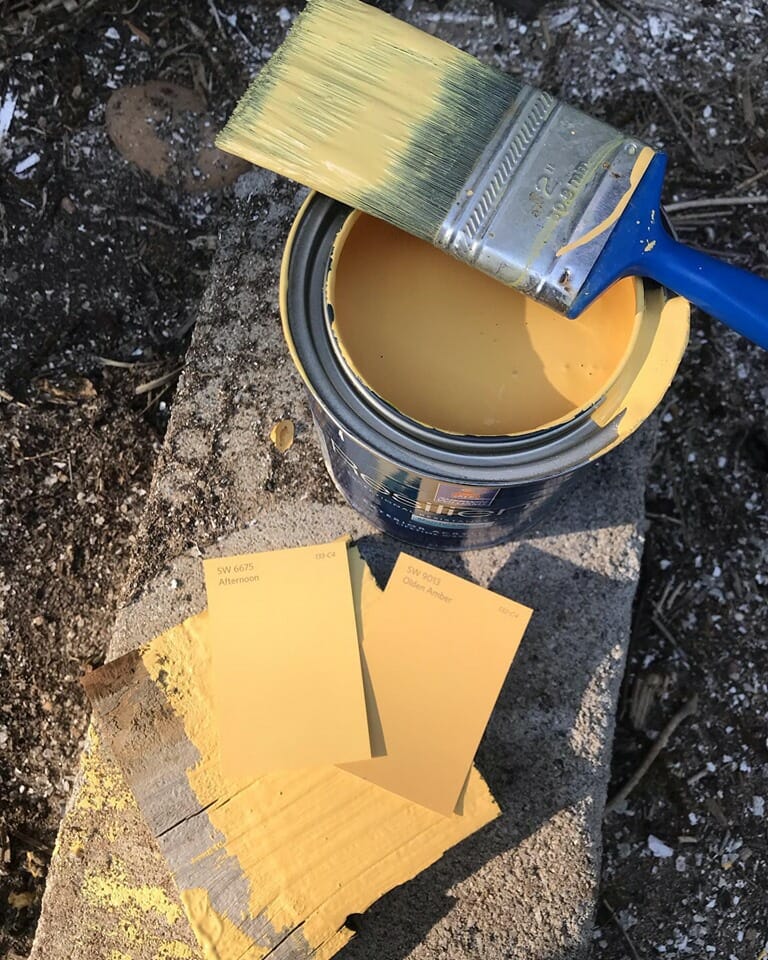 Without a doubt, the most controversial part of our preservation journey has been choosing the bright yellow exterior paint color. It is a common misconception that 19th-century southern homes with columns were originally painted white. Some of them were, but many were not. To find out what color an old house was originally painted, you go straight to the source. There is almost always at least a trace of the original paint under the many layers of new paint, especially in areas that are better protected from the elements.

At the Rockwell House, ochre-yellow was found (pictured below), which was a common color for the time period. While not everyone would have chosen a bold color for a historic event venue, we’ve made intentional choices to immerse visitors into the grand history of Rockwell House while balancing modern necessities. The exterior color pays homage to the vision of Rockwell’s designers which we feel makes the experience of the home really special.

We have not yet replicated the missing original shutters, but this digital mockup (by Preservation South) shows a colorized photo.

History of Our Paint Colors

So what is ochre and why was this a popular color? Ochre is a natural clay earth pigment which is a mixture of ferric oxide and varying amounts of clay and sand. It ranges in color from yellow to deep orange or brown. It is also the name of the colors produced by this pigment, especially a light brownish-yellow. Ochre is plentiful and inexpensive. Bright white (titanium white) paint was not commercially available until the 1920s. Previously, white painted was pigmented with lead, which was somewhat dingy and grey-ish, and had poor coverage ability (I’m told it covered half as well as titanium white).

Another guiding principle at the time, as the Greek revival style was taking hold, was the idea of wanting to mimic the natural stone of ancient temples. Milledgeville’s Old Governor’s Mansion (c. 1838, the same age as Rockwell) is a brick building covered in a pink stucco that is scored to look like marble blocks. The stucco was tinted with red Georgia clay to give it its pink color.

A similar stucco treatment is found at the Aiken-Rhett house, c. 1820, in Charleston, SC (owned and managed by the Historic Charleston Foundation). In this case, yellow mimics bath stone, the trim and column colors mimicking brownstone and sandstone. The house was extensively renovated by William Aiken, Sr. (father of Governor William Aiken) in the 1830s. We find it a fun coincidence that the homes of Georgia’s Governor Johnson (in office 1853-1857) and South Carolina’s Governor William Aiken (in office 1844-1846) share a color scheme and many similar interior architectural details (we’ll do another post on that later). We don’t know if either ever visited the other’s home, but it’s almost certain they would have known each other.

The Rockwell house is of course is a wood-frame house covered in clapboard siding, but the general effect is the same. We do have stucco over the brick and granite foundation, scored and painted to look like brownstone blocks. One major component at Rockwell that is not finished yet are the windows. The house already had white vinyl replacement windows when we bought it, but luckily the previous owners kept all the original sashes in the house, so we will be able to restore most of them. They were originally painted a similar color to the front door. The photoshopped image below shows a real photo of Rockwell altered to show what the windows are supposed to look like (imagine it with the green shutters).

Getting historic paint colors right is both an art and a science. Because of pigment degradation over time, there is no way to know exactly what Rockwell looked like originally, but paint analysis and historic records of what was available at the time gives us a narrow range of possibilities, which is where the art comes in. We couldn’t find a color that we felt struck exactly the right note, so we narrowed it down to two, which we mixed to make our own custom shade, shown at top of page (Sherwin Williams is our local paint store). You can read more in this interesting article from Curbed, Historic paints: Why they’re different and why it matters.